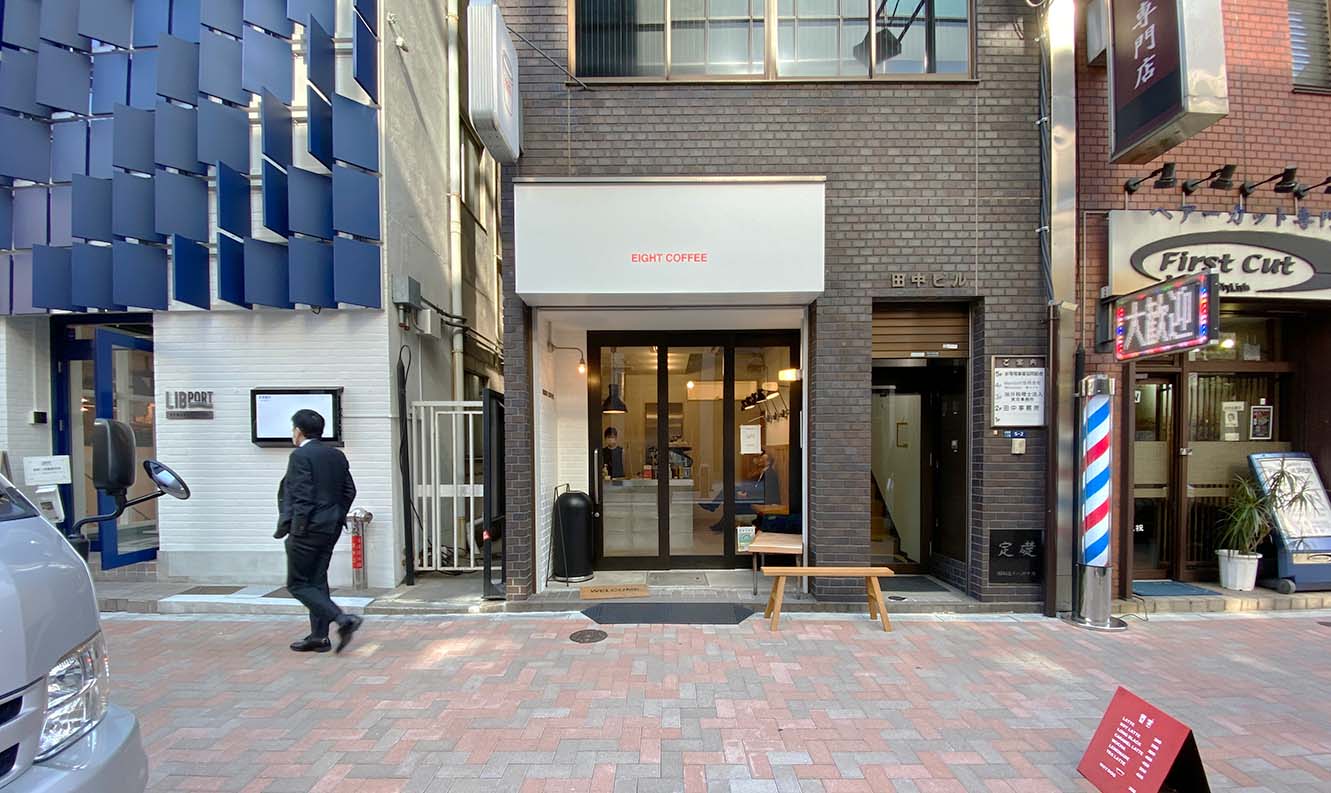 This is a review I’m not excited to write about, probably because it’s not a super positive review, but hey, I’ve got to be real with my experience. On my day off, I was running some errands in Minato, and decided to try and find a new coffee shop to try while I was in the area. I was choosing between two places: one shop had coffee and curry, and one was strictly a coffee shop, and tiny. I thought I’d rather try the small shop. I usually like small shops.

Despite its small footprint, Eight Coffee wasn’t hard to find. It’s right along the street across from what appears to be a large and modern apartment building (in Japan, they’re called mansions, no apartment buildings), only a couple of minutes away from Hamamatsucho station. It’s a very small and modern shop. It follows he common theme of concrete and wood, with a brightness that helps the place feel larger than it actually is. However the only seating is from a couple benches, and I’m guessing it’s so that they can hustle people and in and out quickly.

The first thing I noticed was the low prices on the menu. Ok, actually the first thing I noticed was the a feeling that someone was watching me as I stood outside the shop taking a picture of the fascade, but I decided to try the coffee. I like trying new coffee shops. Oddly enough, the lady inside was standing there motionless with no greeting for me. There was no line, and no-one else in the shop, so I didn’t feel like I should have to rush, but she was kinda silently pressuring me to order – or at least this is how it felt to me. I ordered a latte, and she accepted my order, pointed to the bench and told me to wait there. I asked if I could take a photo, and she told me that cameras aren’t allowed. She was also not using any of the polite courtesies, and language you normally hear from shop personnel in Japan – something you notice when it happens, because it doesn’t happen very often.

I went to my designated waiting spot in the corner and waited for my coffee. She called out my order, and I picked it up and thanked her and sat back down to drink my coffee. I popped open the lid, and I saw that there was a bit of latte art in there. I took a sip, and immediately noticed that the milk was over-steamed. Not to the point of being scalding, but it was probably a bit hotter than it should have been. Is this nit-picking? Absolutely – but it is at the absolute edge of being burnt milk, and probably would be sweeter if it wasn’t heated so intensely. The next thing I noticed is that it was very milky. The espresso was probably good, but the milk to espresso ratio favored the milk more than I’d like. After a few more sips, I left the shop. I didn’t finish the latte. It wasn’t that bad, but since I had planned to visit more coffee shops later in the afternoon, I didn’t want to over do the caffeine, and I had already pre-caffeinated at home.

If you’re in the neighborhood, and looking for a decent coffee, Eight Coffee has a decent cup to offer. I wouldn’t recommend ordering the large sizes of the milk drinks. My guess is that they just pour more milk in, and don’t increase the espresso. Although I’ll likely never find out for sure. It tasted better than the average big chain coffee latte, and it was almost as scalding hot as you would find at those big chain shops. You probably will get nicer service at the big chain shops though, and there’s always something good to be said about having nice service.